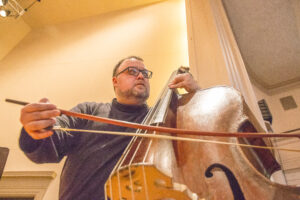 “That very rare person who is both a wonderful teacher and a talented musician, arranger and performer.”

“A bass player I can rely on.”

“A valuable asset to our community.”

“As a person, he is wonderfully sweet and salty.”

Although simple statements, James MacDonald’s musicality is nothing short of rich and robust. As colleagues and students have attested to over the many years that James has been playing upright and electric bass, he possesses a well-balanced aptitude and knowledgeable command for both teaching and playing.

James has a long career in education and administration. During his tenure as Education Coordinator at Vermont Jazz Center from 2000 to 2009, he solidified his teaching style and curriculum development skills. He facilitated workshops, theory classes, and filled accompaniment needs for Sheila Jordan and Jay Clayton during Summer Camps and other events. Seeking a community-focused performance venue and space for student personal and talent development, he founded the non-profit, Open Music Collective (closed 2018) with Kate Parsons. In doing so, he not only diversified his outreach and offerings in summer intensives for adults and children, but offered elective classes studying the music of particular masters. Touted as a “musical and spiritual home” by James, Open Music Collective had a co-op-esque feel where creators could occupy studio and recording space, budding musicians received exposure in cross-genre classwork, and audiences  appreciated performances in a quaint, intimate setting. Open Music Collective hosted Sheila Jordan/Cameron Brown duo, Mike Formanek group, Kurtis Rivers, Alan Chase, Harvey Diamond, and Peter Eldridge of New York Voices among others. As Director of a non-profit, and mindful of honing his public relations, marketing, website building, and fundraising skills, James completed a Graduate Certificate in Non-Profit Management at Marlboro College in 2012. 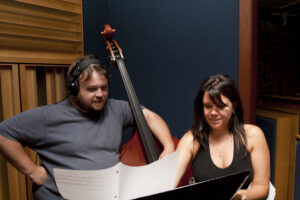 James has been regularly hired over the past several years for lessons and coaching in electric and upright bass and ensembles to youth and adults alike, but also serves on the faculty at Smith College, Deerfield Academy, and Bemont Academy. Previously James has taught at Greenfield Community College, Putney School, Brattleboro Union High School and the Vermont Jazz Center. Described as a mentor who “believes in his students when they don’t believe in themselves,” James is a draw to ambitious and engaged students and his reputation precedes him; current and former students play professionally all over the world, have won competitions and jobs and are performing regularly.

James received his BM/BA in Performance and Music History/Theory at Keene State College in 1999 and completed a Masters in Music in double bass performance at University of Massachusetts Amherst in 2016, studying under Salvatore Macchia. Other mentors and past personal instructors include Mike Formanek, Cameron Brown, and Don Baldini. 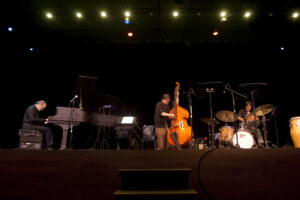